skip to main | skip to sidebar

After a lot of deliberating on when to set off and no “perfect” forecast to get us to Iceland before Linda has to fly home on the 11th we checked the forecast one last time and decided to set off from Faroe at 3pm on Wednesday the 3rd of July. 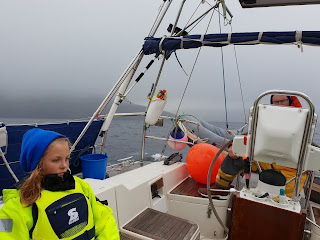 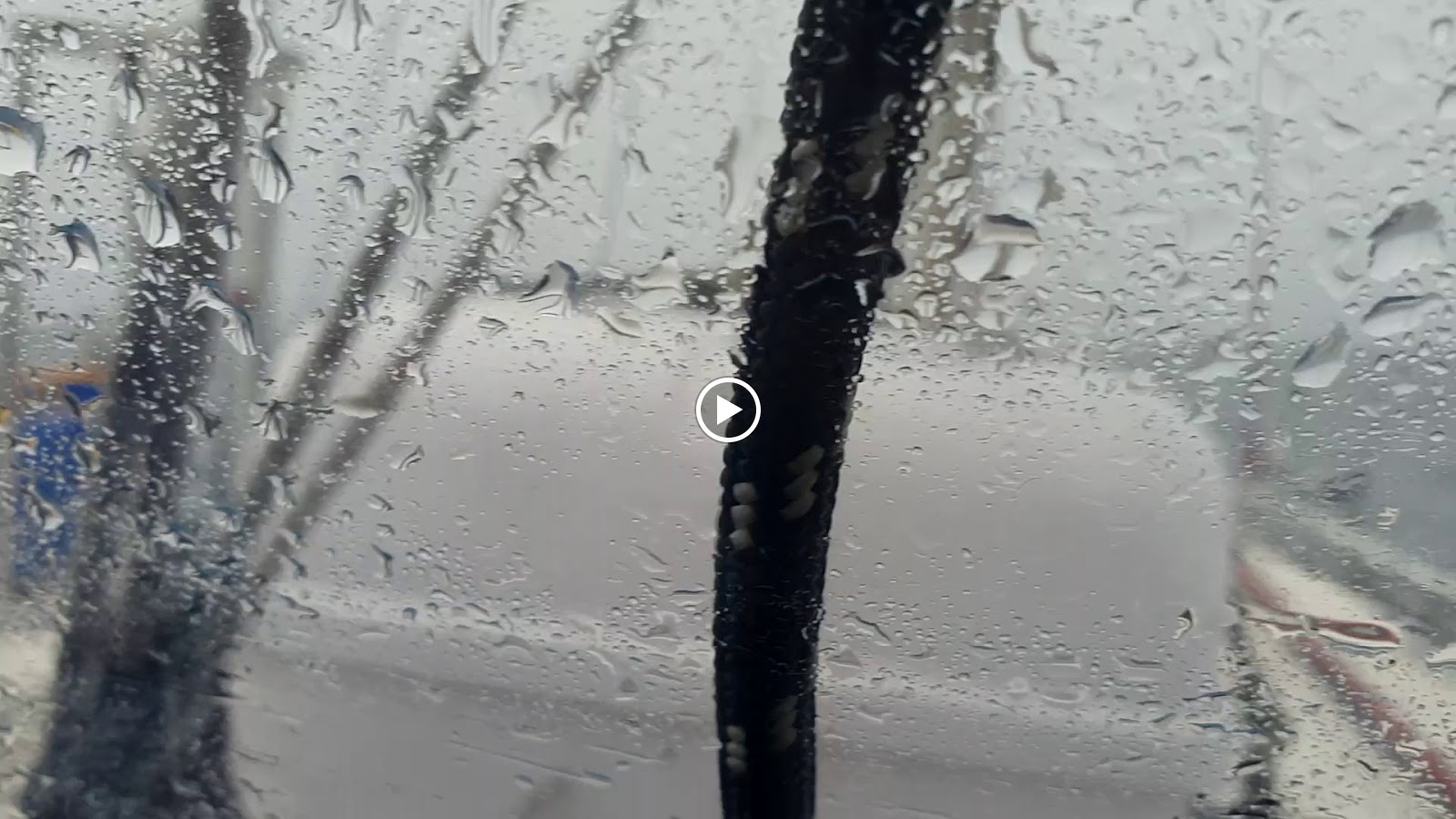 The rain and mist had set in before we left so we didn’t get to see the waterfall from the lake on Vagur but at least now with the new AIS system we could see the other boats around us although we still have a regular look out as some could be travelling under the radar as we have always done up until now! 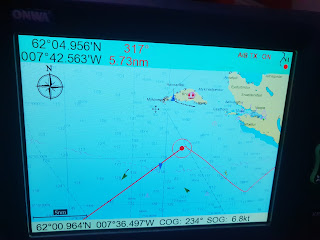 The tides in Faroe are something which have really surprised us with their strength and pull they are stronger even than Shetland’s  “Da Roost” and I would imagine could even give the West coast Corryvrekin a run for it’s money! We thought we were getting an advantage from the North flowing tide around Mykines but after we passed it started pulling us North East which was largely unhelpful as we were trying to get west into a patch of wind that would be in our favour.  We never managed.... 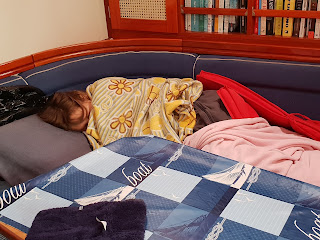 Best bunk on the boat!


There follows a long tale of the most motor sailing we have ever done on a passage with a storm and clam bits in between.  Thankfully the stormy bit was at the only point the wind was actually in a favourable direction. 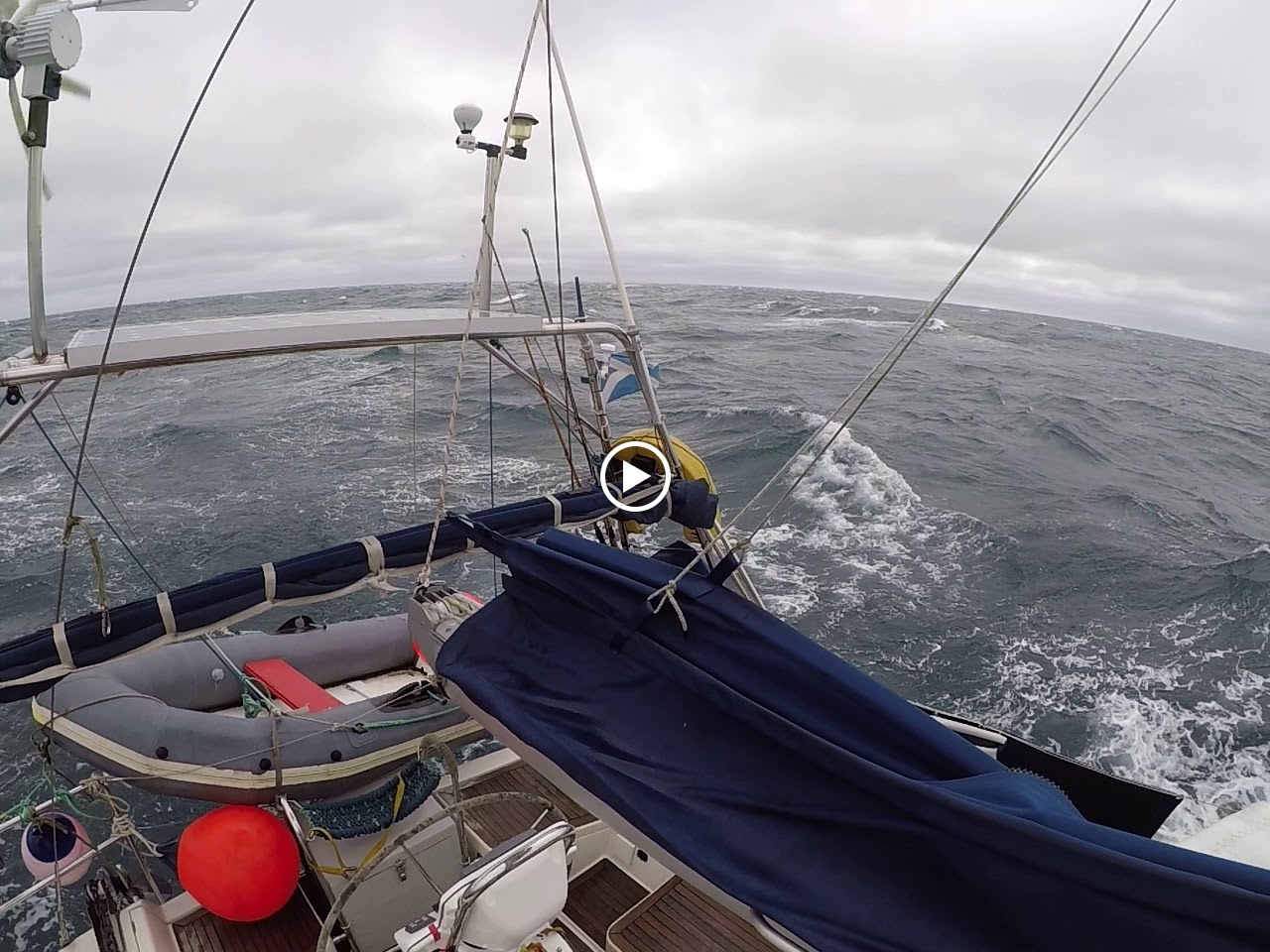 When the storm had passed it left a very bumbly sea but some pilot whales with a calf came to entertain us for an hour or so.

As Saturday morning dawned and the seas and wind were still against us we despaired of getting to Vestmanaeyer by night as we had hoped because it was Kaylee’s birthday and the poor girl had been so sick we wanted to be tied up by night so she could eat at least!  But then the wind died and changed direction Unst slightly so we could motor sail the whole way along the South Coast of Iceland which was beautiful to see.  We drove the Highway 1 last year along here and it is even better to see from the water as you can see all of the glaciers and mountains, truly spectacular! 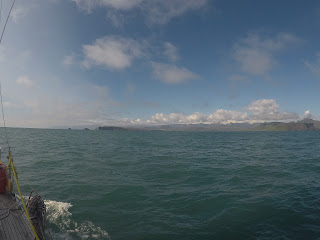 By 9pm we had reached Heimaey of the Vestmannaeyjar all had showers as we were pretty grisly after three days in the same clothes and were ready for what we thought would be a lovely quiet dinner with a few beers.   As it turned out this Saturday night was an all night party to mark the anniversary of the “End f the eruption” in 1973 when a third of the island was covered in lava and a new hill was formed.

Cave on the entrance to Heimeay

Pizza to fill the empty girls up!

A massive street and bar party which went on until 5am 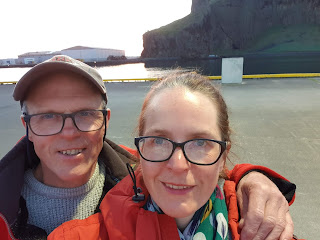 After a hectic period of preparation including a last minute concert where our daughter Alisha was performing, we finally left our mooring at 10pm on Sunday the 23rd of June.  We were favoured with a most beautiful evening and sunset.

We had a mixture of light winds which meant using the engine some of the time.  On the way across we had visits from dolphins and pilot whales.

We had Faroe on the horizon about 2.30 am Monday night and made it into Vagur Harbour on Suderoy , the most southern of the Faroese islands about 6 am. Although we were very sleepy, it was a spectacularly beautiful morning, so we decided to have breakfast and go walking. What scenery- it was breathtaking.

The girls had an hour or two of climbing, much to Linda’s annoyance ( she does not like heights ) 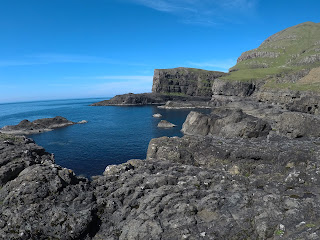 Finally we headed back to the boat for dinner and a good long sleep. The harbour is very busy with local fishing boats and also home to the old fishing boat- “Johana”- which is a frequent visitor to Shetland.  We are berthed just opposite her tucked into the corner. 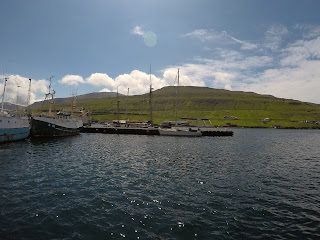 Totally unexpected we had a visitor- Magnus Johnson who worked in Shetland many years ago, married Margaret and live in Vagur. They invited us up to their house for supper- excellent waffles.
Today has been windy and totally the opposite of yesterday, we have made the best of it by giving the boat a good tidy-up and then going swimming. Next post soon.

So Islay Mist is just about to set off again, this time North and West.  The Tulloch family will leave Shetland late June sailing to Faroe then Iceland from where the ladies will leave and Alistair will be joined by a hardy crew of adventurers to set off for Greenland then Canada.  All going to plan anyway!! This is just a test to see if we can remember how to upload things to the blog....


This pic is a bit of passage planning and checking the old navigation system is still working!
Posted by Islay Mist on the Way Home! at 15:54 No comments:

Sent from my iPad
Posted by Islay Mist on the Way Home! at 15:45 No comments:

Islay Mist on the Way Home!
This is the blog for the Tulloch Family on our sailing trip to the Med. We are hoping to go for two years and see as much as we possibly can, making it the best experience for the girls (and us!) We will be posting as and when we can.